After losing their only grandson in a car accident, grief-stricken Audrey (Sheila McCarthy) and Henry (Julian Richings), a doctor, kidnaps his pregnant patient with the intentions of performing a “reverse exorcism”, putting Jackson inside her unborn child. It doesn’t take long to figure out Jackson isn’t the only ghost the grandparents invited into their home. Now it’s a race against time for the couple, as well as the pregnant woman to figure a way out of the haunting they’ve set upon themselves.

Shudder streams via their service in the US.
This is a Canadian horror movie that originally aired before Halloween on Super Channel Fuse in Canada.
Anything for Jackson will premiere on Shudder on December 3, 2020.


ANYTHING FOR JACKSON (2020)
MOVIES and MANIA

THE PERILS OF “REVERSE EXORCISM” IN “ANYTHING FOR JACKSON”
Rue Morgue 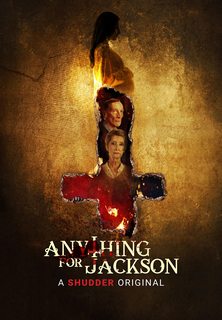 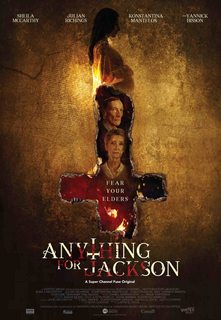